How’s it going? You look like you need to eat something. Perhaps a bun? Hmm, now I want a bun. Or a piece of cake. I think we have some at home – my friend and I have this tradition of celebrating each other’s half-birthdays, ergo, left-over cake. Mmmm, cake. Okay, before I go, here’s an excerpt from my write-up on some of the world’s weirdest festivals for FOG.

Spain takes the lead for downright unusual festivals with this one. 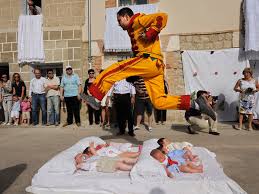 over a baby, the Spanish town of Castrillo de Murcia celebrates the Catholic festival of Corpus Christi by doing exactly that. Unsuspecting babies are laid on a mattress in the street for what seems like their afternoon sleepytime.  Then, suddenly, with no warning, a man dressed as the devil (in Spain, Satan wears a red and yellow jumper) runs up and leaps over the babies, startling the bejesus out of them and probably scarring them for life. The devil’s impersonator continues to hurdle over more babies, leaving mothers breathing a collective sigh of relief that there were no miscalculated jumps in his wake. The devils also flick whips at tourists and townsfolk, so that everyone is equally traumatized by the festival.

Just in case you were wondering, no babies have been physically harmed by this festival, ever since its inception in 1620.

Although this may seem unnecessarily reckless, the townspeople of Castrillo de Murcia believe that when Satan’s representative jumps over the baby, evil follows the man and leaves the infants’ soul clean. So, it’s the simplest way to save the children from original sin and guarantee them a ticket into heaven.

Unsurprisingly, the Pope has washed his hands clean of this festival, warning people that souls should be saved by splashing water on babies’ heads rather than through an airborne jumping devil – which makes total sense of course.

Read the rest of the article here. As I’m moving to the U.K. for a year to (hopefully) get my Masters done, this will be the second to last article for FOG.