Now, I’m sure that while most of you have either read, studied or heard of Shakespeare’s plays, not many of you are as familiar with Christopher Marlowe and his oeuvre. I don’t blame you. All I knew about Marlowe was that he was responsible for “Is that the face that launched a thousand ships?!” courtesy Shakespeare in Love. Turns out, Marlowe’s not only known as the rock star of the early modern period but he was also a spy for England. The Privy Council actually had to intervene when Corpus Christi College refused to grant Marlowe’s M.A. degree because he’d had too many unexcused absences and tell them that he’d been otherwise occupied in “service to the Queen.” He was also arrested for making counterfeit coins and he died in very mysterious circumstances – being stabbed above his eye in a pub apparently over the bill. If all this doesn’t pique your interest, congratulations, you are dead inside. Hah, but really, as Swinburne wrote in 1908, Marlowe was Shakespeare’s John the Baptist: “He is the greatest discoverer, the most daring and inspired pioneer, in all our poetic literature. Before him was neither genuine blank verse nor genuine tragedy in our language. After his arrival the way was prepared, the paths were made straight, for Shakespeare.” Which basically is a polite way of saying that Shakespeare basically sponged off a lot of Marlowe cleverness to include in his own plays.

For instance, when Marlowe’s (Jew of Malta) Barabas sees Abigail on a balcony above him, he says

But stay! What star shines yonder in the east?
The lodestar of my life, if Abigail!

But soft! What light through yonder window breaks?
It is the East, and Juliet is the sun!

You say potato, I say pohtahto.

And if you’re familiar with the Merchant of Venice, you’ll have fun recognizing the similarities in Shylock’s ‘if you cut me, do I not bleed’ speech to Barabas’ speech in which he chastises the leaders of Malta, telling them that if they find his dealing unfair, it’s only because he’s learned it through his observations of how the Christians dealt with him.

Marlowe was very, very subversive for his time. He was a product of the new spirit of Renaissance individualism in a still orthodixical world, and his plays demonstrate this restlessness. His plays would have been explosive during his time. For one, there’s Dr. Faustus ranting his way into nihilism way back in 1604. Half way into Scene One and he’s already questioning the notions of sin and 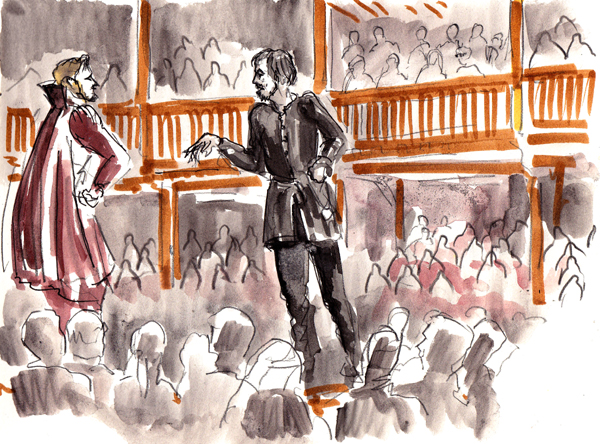 punishment – if we’re human and are born into sin, then why not sin willfully because we’re all doomed to die anyways, right.This was RADICAL for the time. And then there’s Tamburlaine, disbelieving shaking his fist towards the heavens, daring God to come down from heaven to prove his existence. This religious rebellious streak eventually led to charges of blasphemy and worse against him. The Baines Note accuses Marlowe of claiming that religion’s purpose was to keep men in awe, and if people were to follow it, then well, it should be fun and most definitely involve tobacco, of saying Christ was a bastard and his mother dishonest”, that Moses was a second rate magician and that Jesus was a homosexual. Haha, clearly not one for subtlety, Marlowe.

This brilliant sense of humour’s very evident in all of his plays. The Massacre In Paris (with its self-explanatory title) is more a dark sort of a humour, a lets-say-witty-things-while-we’re-bashing-each-others-heads-in, but there’s this fantastic bit in Hero and Leander in which Leander who’s swimming across the Hellespont to meet Hero gets waylaid on the way by Poseidon/Neptune who drags him down to the bottom of the ocean mistaking Leander for the immortal Ganymede. It’s only when Leander’s turning blue that Neptune realizes his mistake and let’s him go. Almost dying is a good way to prove that you’re mortal, after all, heh. And then there’s Tamburlaine who color codes his army according to the mood he’s in. If they’re all in white, tis okay, just a light slaughter; red, well, if you were a woman you’d be alive at the end of the attack, and if they’re in black EVERYONE DIES!!. Heh.

As is clear, I’m quite enthralled by Marlowe who is quite the hot mess; he’d have me laughing into his bed, easy. Then again, Marlowe’s sexual orientation has always been up for debate. “The Passionate Shepherd to His Love“, the most famous Elizabethan pop song/poem is radical because although the title of the poem indicates that the speaker is a man, the addressee of the poem, however, remains vague and abstract – it could be written to a woman, or more scandalously, a man. But, I digress.

Anyways, for one of my essays, I chose to focus on Marlowe and the Overreacher in Tambourlaine and Doctor Faustus, which I really enjoyed writing. Even though it appears as though Marlowe’s Icarian protagonists fall because they fit the cookie-cutter mold of blaspheming against the God(s) and then being damned to a life of hellfire and brimstone, this is not necessarily true. Both Tamburlaine and Faustus crave greater power, true, but they also consistently demonstrate an awareness of their place in the Great Chain Of Being, which is underscored by a recognition of their mortality. So, then I decided to apply the classical definition of hubris to the actions of the protagonists. Interestingly, from this point of view, both Tamburlaine and Faustus, in their quest to become superhuman, instead become subhuman. Therefore, they are punished for being over-reachers, but in a more problematic, ethical sense. It’s quite interesting if you’re interested in Machiavellian individualism and Renaissance humanism, but incredibly difficult to write about.

Aand I’m sure by now, you’ve lost all interest in reading this. I don’t blame you if you’ve fallen asleep by now but I hope that I’ve piqued your interest sufficiently. I give you my word that you won’t regret it. Marlowe is very accessible and besides I have excellent taste (and humility as is quite evident). Had Marlowe lived, and kept writing, his may have” been the dominant sesquicentennial (halfway between the quad- and quin- centenaries) of 2014.”  As it is, he remains the perfect – and more darkly magnetic –  shadow in Shakespeare’s sunshine day.  If you haven’t read his plays, this is the year you probably should.